About a year ago I encountered an identity crisis. Was I a photographer, stylist, director, or just an artist who’s medium shifted with her changing mood? To be honest, I’m still not 100% sure, but neither is TJ so it’s possibly a universal thing. In any case, I was worried I might be a control freak, and made the conscientious decision to pigeon hole ourselves a bit to see if putting some roles in other people’s hands allowed us to enjoy shoots more, and possibly to create better work. So I set about planning some collaborations for us where TJ and I were “just” the photographers, though I wasn’t exactly sure what that would really mean.

This collaboration with Chloe Barcelou and Brandon Batchelder was our first foray. Chloe proposed the concept of doing an interpretation of  Jean-Honoré Fragonard’s “The Swing,” a dreamy rococo confection of a painting from 1767. “The Swing” isn’t one of my favorite paintings, I find it cloying. Bosch, Van Eyck, Magritte, Hopper, Waterhouse, Renoir… I could go on and on with painters whose work I salivate over, but Fragonard isn’t one of them. Still, I was committed to my experiment of being a photographer first, so I looked for things about “The Swing” that did appeal to me. 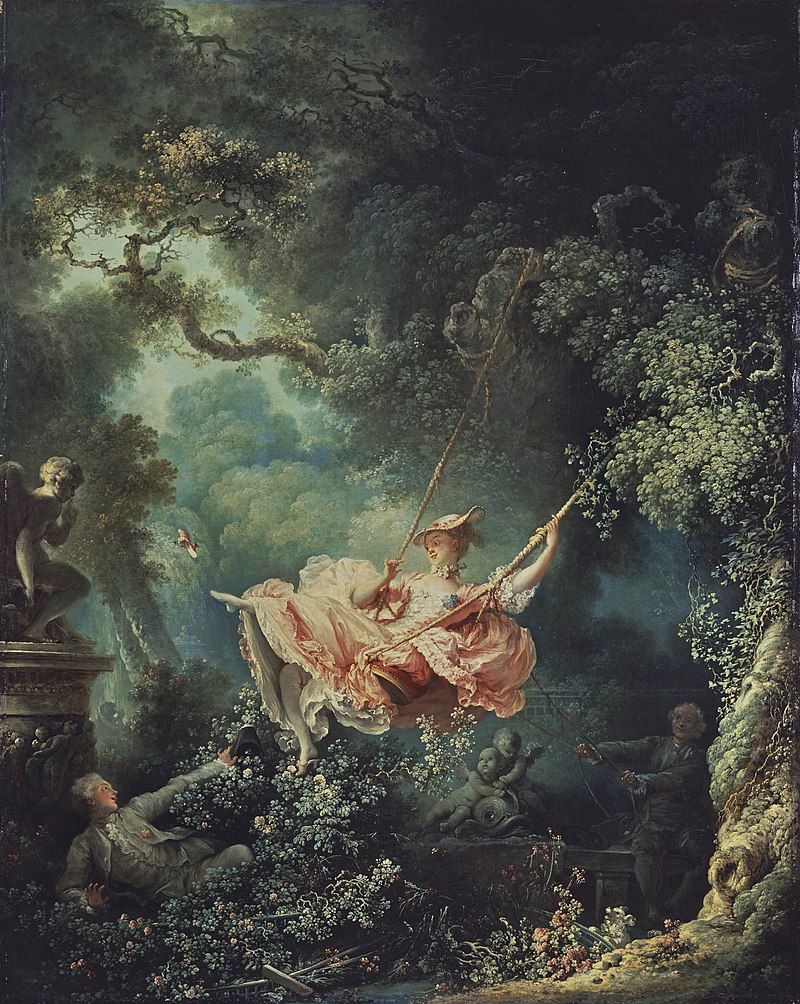 The first thing I noticed was the use of color. I wasn’t a fan of the particular color palette per se, but I liked that the pink dress stood out from an otherwise fairly  monochromatic background. What I really liked, however, was the somewhat hidden gardener holding what look to be ropes to counterbalance the weight of the girl on the swing, and the rakes and such in the foreground, adding a realistic aspect to an otherwise pure fantasy. When Chloe suggested that we use an industrial space and some intricate wallpaper as our backdrop (as opposed to a garden setting), I perked up. It all seemed to fit into my general interest in creating images that are a bit “off” and unexpected. My suggestion was to play on the “behind the scenes” or “making of” aspect she was going for and add two male models to play the role of gaffers or photo assistants (as opposed to a gardener). They would take the place of the two men in the original, as well as adding that break with fantasy that I thought was important to parallel.

The shoot day was long, with a lot of preparation. I’d envisioned a room filled with real flora, but that had proven rather difficult to procure in the time we had to plan the shoot. Instead, both Chloe and I made paper peonies, she from dyed coffee filters (used on the swing) and I from the leftovers of this shoot (used in her hair). She had also collected fresh ivy to weave over the swing Brandon had crafted from wood and rope, which he masterfully hung from the ceiling at Westerman’s Prop House. I happened to run into a petal-shedding tree that morning, and did my best to collect as many handfuls as I could just in case we could figure out a way to use them.

At some point of staring at the set, it occurred to me that I really liked the ladder, although the yellow and blue metal wasn’t working for me. Luckily we were in a prop house, so that was easily remedied.

With the ladder in place it occurred to me that we should have one of the models standing on it throwing the petals, which I’d moved into the shoebox of Chloe’s very expensive shoes.

For lighting we wanted a really natural look, like light was filtered through trees and dewy sky, so we set up a gigantic softbox camera left and left it pretty low so we could use the natural window light (camera right) for fill.

TJ explained to Adam how to look attractive while throwing petals.

Chloe wasn’t actually able to get the swing to move on her own, so Brandon was back and forth through that door on the right to push her. We also weren’t able to actually toss the shoe in fear of scuffing it, so it had to be composited in when I processed the photos.

Below is the more literal interpretation of the painting that Chloe envisioned. I liked the ladder there to add balance, but I feel like this would work better with more characters to take the role of the Cherubs. Someone should be on the ladder…

This is the composition TJ and I envisioned after seeing the set, and the selected final shot. There was a fog machine, but I wound up having to add more fog in post-processing, along with the petals, which never did what I wanted, when I wanted them to do it.

The photo below was an amusing moment I set up in the middle of attempting to get everything “right,” but it’s actually my favorite shot from the day, I only wish I had also included Brandon pushing Chloe.

In the end, I’m not sure if we succeeded at being “just” photographers or if this is what “just” being a photographer means. With a year’s perspective and many more shoots under our belts, I don’t think I’m a control freak- I love collaboration where everyone works to make the final work a better version of what it would be otherwise. But both TJ and I actually enjoy directing, and there was a clear feeling of its absence in this particular shoot when I completed the final product. It just wasn’t ours, even though I know we didn’t just show up and press the shudder button.

That’s not to say it would always be like this, but let’s just say TJ and I will be sticking to recreating paintings that we actually like going forward, if you know what I mean.

Even T Perry filmed a video of the shoot- you can check it out below.